Ewan and me with our meringues

As a family we’ve always been a greedy bunch and interested in most aspects of good food, whether it’s tasting, cooking, shopping, baking, overeating, reading about…even watching Saturday Kitchen (I’m not normally one for daytime telly…once a Calvinist…). When the boys – Rory and Ewan – were little, they used to moan about their mates being allowed Domino’s and why on earth did we always have to have this homemade stuff?

Now they’re almost grown up they wouldn’t thank me for a ready meal or takeaway food (curry’s the exception – you can never quite get the results at home. And maybe fish and chips from the Happy Haggis in Aviemore. Hell of a name I know but the fish suppers are legendary). Rory’s at music college in Leeds and because he’s not subsisting on pasta and pesto his mates reckon he’s the spawn of Jamie. He loves to get hold of a half price duck from Sainsbury’s on a Saturday afternoon and roast it with a load of vegetables on the Sunday to deal with all their hangovers.

The little one, Ewan, is a brilliant cook at well. In fact he’s going to make a career out of it. He’s almost 16 and is off to Westminster College in September to start a three- year professional chef’s diploma – I can’t wait for all those goodies to come through the front door of an evening.

Of course with all these calories going in, there’s a price to pay. So as well as cycling most days, I also haul myself round the local park every morning before I’ve had time to wake up properly. Yesterday I bumped into my old pal Pippa who was also puffing her way round the park so we stopped for a chat. She mentioned she had a girls’ eve coming up and she was down to do pud. It was going to be lavender meringues…a la that charmer Valentine Warner.

Mmmm, liked the sound of those, so when I got home I attacked the lavender bush and took the egg whites from the freezer (they thaw in no time in this heat). When I make meringues I always weigh the whites first (there was 140g) and then weigh out double that in golden caster sugar (more caramely than white).

Into the KitchenAid go the whites, whisk, whisk, whisk till dry and foamy then add the sugar bit by bit and keep whisking until very thick. Just before the end, add four heads of lavender, crushed in the pestle and mortar, plus a little purple food colouring.

Granted, food colouring’s not the sort of thing you’d normally have in your cupboards, but Ewan recently had a grand pash for making those yummy French macarons in varying shades. Btw, Squires online shop is the place for all those colours. 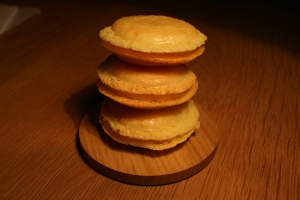 A few of the gorgeous macarons Ewan made recently

So in went the purple powder. I didn’t want them to end up too lurid but think next time will be a bit bolder with the colour. I put them in blobs on silicone-lined (the only way) baking trays and baked them at 140 C for an hour, turned off the oven and left them in there a few hours longer.

Then I welded them into pairs with thick cream and sprinkled over the last of the raspberries and blackcurrants from the allotment. Ewan was running a barbecue for his pals round the corner at his dad’s (while dad was out) and so I took the plateful there for their pud (not that Ewan allowed me beyond the kitchen. Just drop and leave). I was told everyone loved them, and yes they did taste lavendery. Ewan’s had a request from the pals for more, so he’s busy whisking while I am typing this. He’s decided to add more colour than I did – good move.

4 heads fresh lavender, crushed in a pestle and mortar

purple food colouring (or a mix of blue and red)

Whipped cream and any soft berries

Preheat the oven to 140C/275F/mark 1. Whisk whites in mixer until dry, foaming and in stiff peaks. Slowly add sugar while mixing until you have a thick consistency. Add the lavender and food colouring (go easy – you can add, but difficult to subtract if you add too much!). Put dollops of the mixture on to a silicone sheet on a couple of baking trays and bake for an hour. Turn off the oven and leave the trays inside to cool for at least a couple of hours.